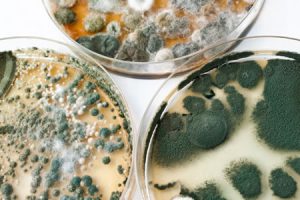 Fungal diseases awareness week highlights the importance of diseases caused by exposure to fungi/moulds in the workplace. It also highlights the importance of preventing exposure and of recognising symptoms or diseases so that workers’ health is protected and improved. Workers spend a substantial fraction of time (~90%) within buildings such as offices; therefore indoor air quality becomes an important risk factor for human health (WHO 2009; Bonetta et al., 2010; Di Giulio et al., 2010).

Microbial agents such as fungi/moulds and their by-products (beta glucans, mycotoxins) are ubiquitous in the environment both outdoors and indoors and their particles float continually in the air we breathe thus impossible to eliminate in the indoor environment. The increased levels of fungal/mould agents are attributable to excessive moisture, poor housekeeping (dust and dirt), inadequate or poorly maintained ventilation, poorly regulated temperature and relative humidity, nutrient substrates (wet floors or carpets, books/paper, wood, paints, furnishing, wallboard (drywall), ceilings and other fabric etc. (WHO, 2009; Di Giulio et al., 2010).

Many fungal/mould agents not only originate from activities of workers but also from outdoor air entering through doors, windows and building cracks. Adequate ventilation can help remove or lower the microbial load from the outdoor environment (Bonetta et al., 2010; Di Giulio et al., 2010).

Concern about fungal/mould exposure in the workplace has as exposure can lead to various health effects and symptoms or aggravate illness in susceptible workers, particularly those that are immunocompromised. Some workers may be more susceptible to fungi/moulds than others. Unlike chemicals, exposure to fungal agents does not have occupational exposure limits to assess health impact due to various human responses, non-standardised methods and the complexity of their entity (Srikanth et al., 2008).

It is important for workers with allergies, infections or toxic effects that appear to get better when away from work or that is not getting better with treatment to think of “work exposure to fungus/moulds”. It is also important to inform the occupational health doctor or nurse of the possibility of fungal/mould exposure. Occupational disease claims linked to fungal/mould exposure is lacking however cases of mould exposure have been investigated. It is not easy to link worker exposure to moulds at work as moulds are ubiquitous (everywhere) in the environment. However, thorough investigations may link the source of exposure to immunological findings.

Further information regarding occupational risk, prevention and testing can be found here

Further information regarding fungal diseases week can be found here